It’s Time To Break Up With These Food Rules 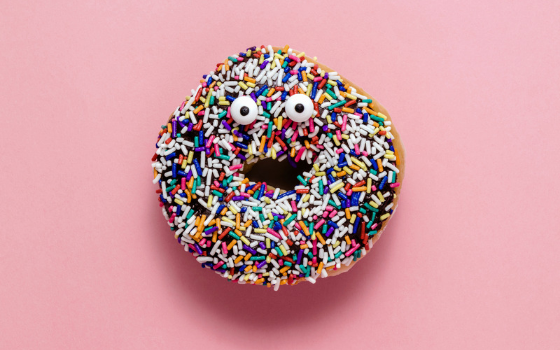 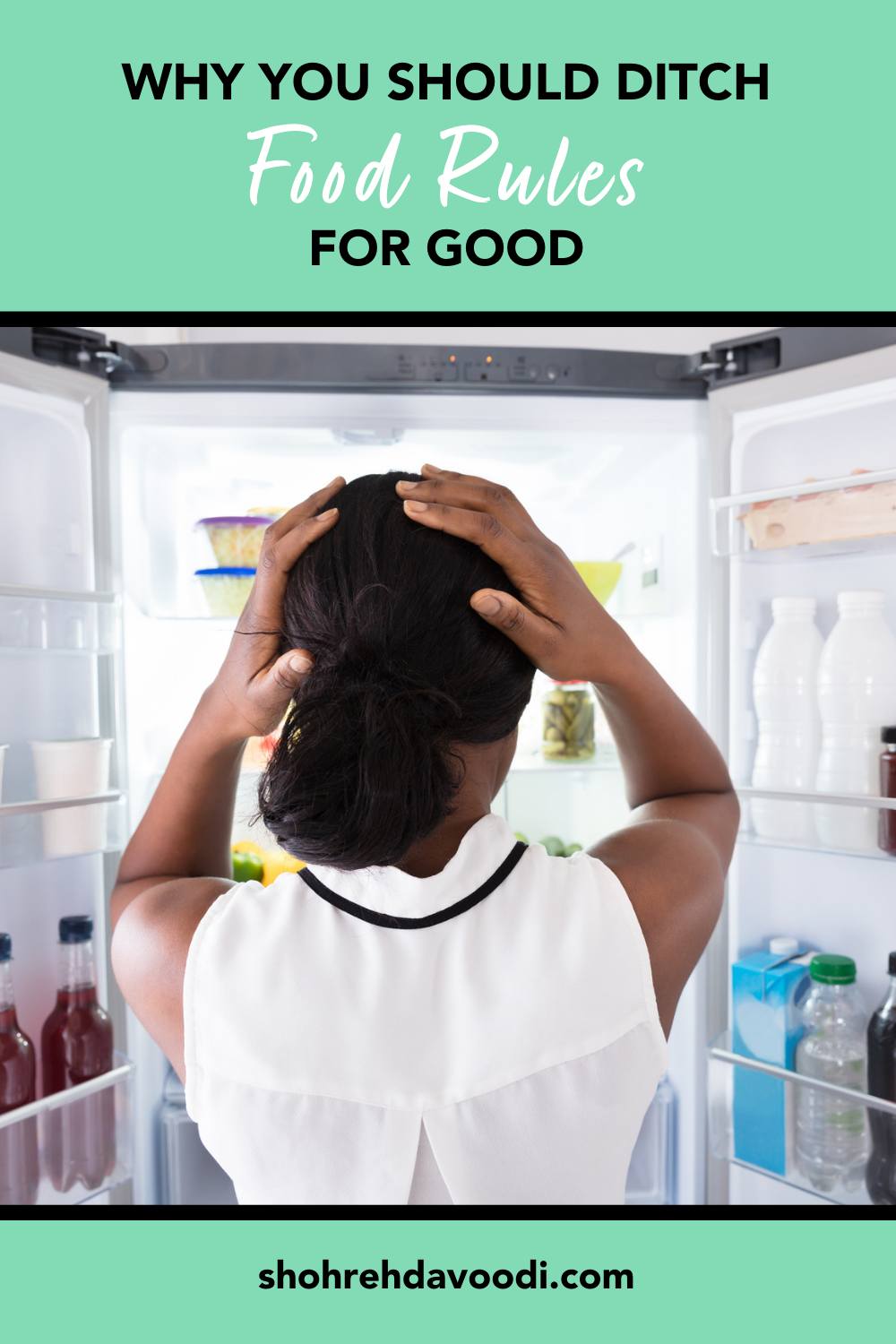 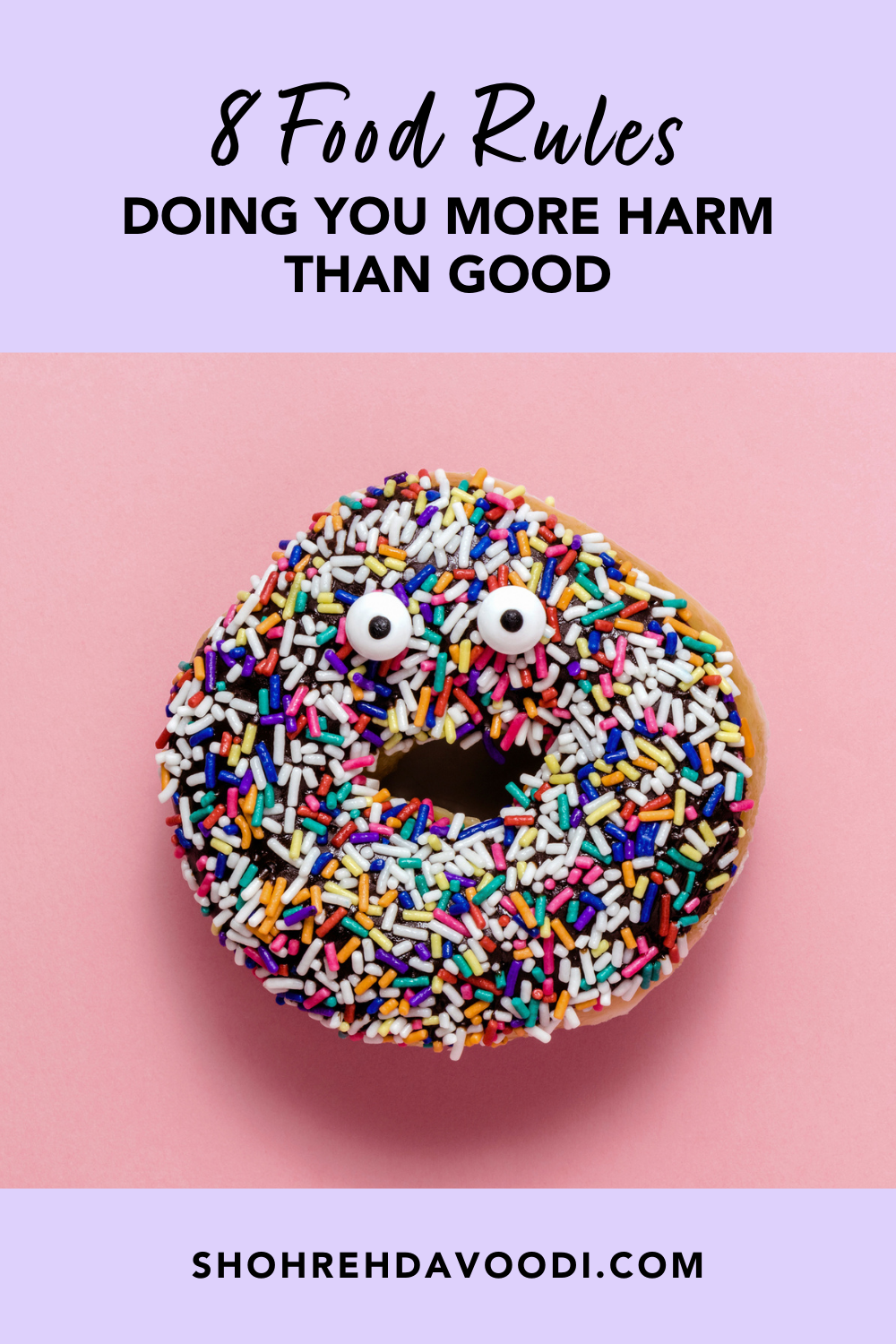 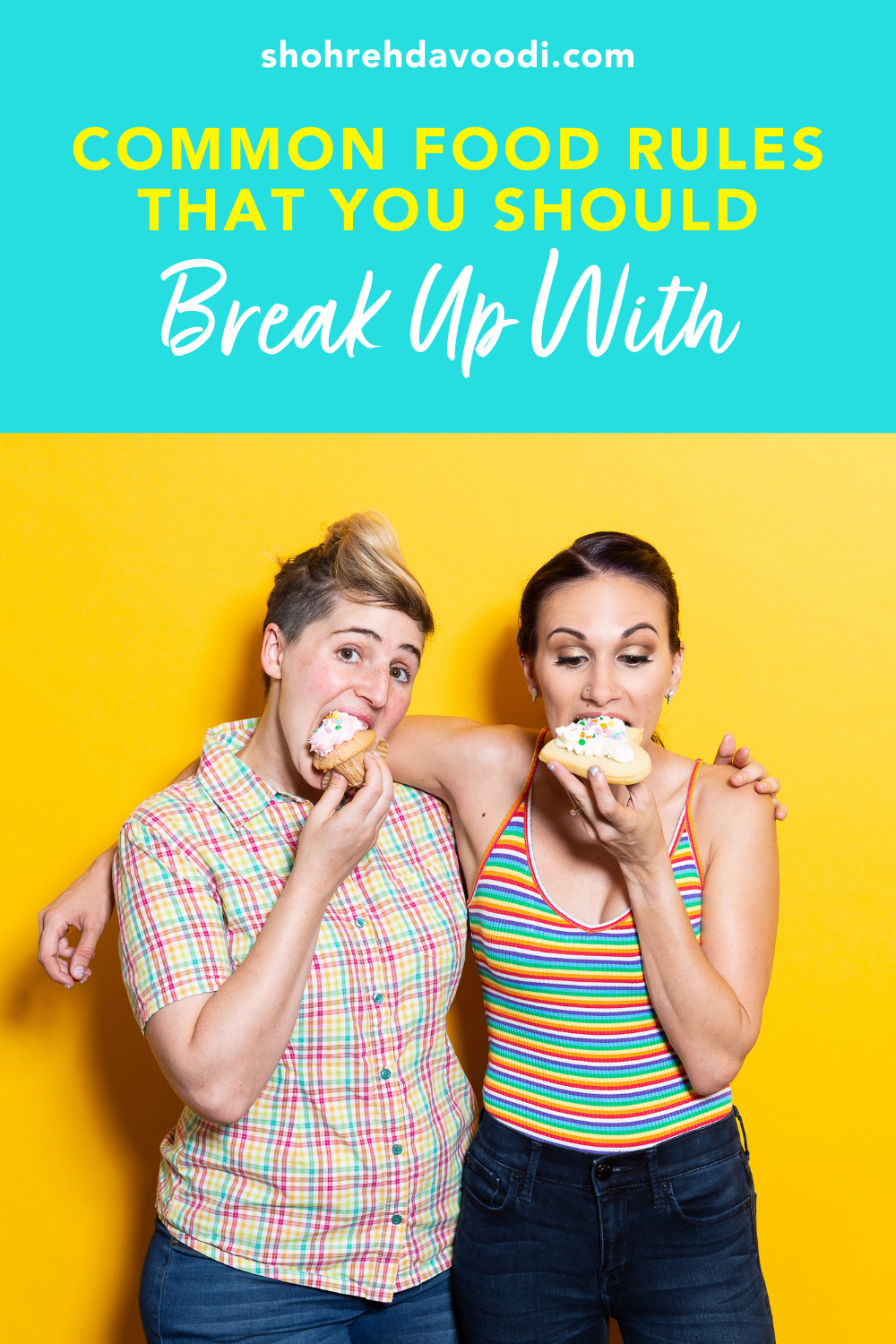 It used to be the case that whenever I would sit down for a meal, I would run through a series of food rules in my head before choosing what to eat. I scanned nutrition labels, mining for information that would let me know if I was “allowed” to eat that particular food, refused to eat any white foods (bread, pasta, rice, etc.), and investigated how “processed” the food was and how much sugar it contained.

These rules and others made the experience of eating a less-than-pleasurable one for me. I was obsessed with eating “clean” and struggled with guilt when I would inevitably break the rules. It was an exhausting way to live that damaged my relationship with food. 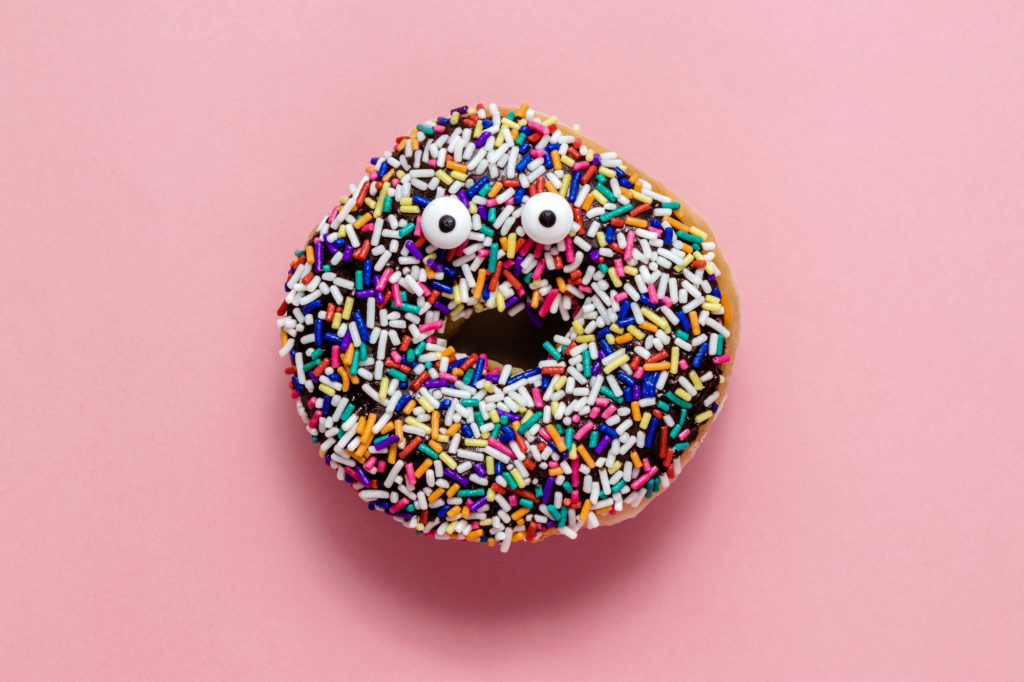 Food Rules Are Not Our Friends

Food rules are lurking all around us, most especially in our own heads. These rules are repeated over and over again—in magazines, by family members and friends, and on social media—until they're so ingrained we can't even remember where we first heard them.

As a coach who works with a lot of clients on their relationships with food, I believe that strict food rules are a harmful byproduct of diet culture. Eating according to one-size-fits-all rules doesn't account for the diversity of our bodies and needs. While following food rules can make us feel safe and in control, that's only because we live in a world that has taught us that our own bodies cannot be trusted. Spoiler alert: with practice, they totally can be.

Unlike a child living at home with her parents who has to follow the household rules, we don't have to follow food rules to avoid getting grounded or having our Xbox taken away. There is no Czar of Food we have to answer to if we choose not to eat goji berries or kale. The voice of these rules is only in our own heads, and that means we can make whatever changes feel good to us.

Stop Following These Popular Food Rules With No Thought

The first step to leaving behind food rules is recognizing which rules you've internalized and have been following. Below I tackle some of the most popular food rules and explain why you probably don't need them in your life.

1. No Eating Carbs At Night

You do not need to set an alarm on your phone every day that reminds you when it's time to stop eating carbs. Yes, you can totally keep eating carbs at night and even *gasp* right before bed. It is not true that eating carbs after a certain hour means that those carbs will be stored as fat when you sleep. Carbs are your body's preferred source of energy, and there is no daily cut-off for when your body might benefit from that energy.

2. Only Shop the Perimeter of the Grocery Store

The idea of shopping the perimeter of the grocery store came about because grocery stores usually display their fresh foods (produce, meat, dairy, etc.) on the perimeter, whereas all other foods are housed in the aisles in the middle of the store. However, if you never shop in the aisles you'll miss out on all kinds of nutrient-dense foods like grains and pasta, canned and frozen vegetables and fruit, broths and stocks, vinegars and oils, herbs and spices, etc. Further, all the other foods you can find in the middle of the grocery store that aren't as nutrient-dense don't need to cause fear. All foods can fit into your diet. You can have strawberries and fruit snacks, potatoes and potato chips, almond milk and ice cream, grocery geography be damned.

The 80/20 rule suggests that as long as you eat “healthy” and “clean” 80% of the time, then you can eat “unhealthy” the other 20% of the time. One of the biggest issues I have with this approach is that it sets up a dichotomy where some foods are “good” and others are “bad,” which puts food into an unnecessary moral hierarchy. Another pitfall of the 80/20 rule is that our diets don't work like math problems. Each person's body has different and varying food needs dependent on many factors, such as metabolism, personal preferences, activity level, etc. Ignoring the foods your body is asking for because they don't fit into your 80/20 plan is a form of restricting that can cause weight cycling, binging, and other negative outcomes.

4. Fill Half of Your Plate With Vegetables

There are plenty of times where I fill half (or more!) of my plate with vegetables, and there are also plenty of times where I don't. We know from copious amounts of research that consuming vegetables comes with health benefits, but that doesn't mean that literally 50% of your diet needs to be veggies. A hard and fast rule like this one can lead to people feeling guilty at times when they don't want to or can't have that many vegetables in a meal. If you're interested in increasing your vegetable intake, there are ways to do so without committing to an exact amount per meal. Sometimes you might want more vegetables, and sometimes you might want less, and both scenarios are okay.

5. Cut Out All Sugar

Sugar is not the new heroin. It's not addictive, it's not toxic, and it's not the enemy. One of the reasons sugar can feel addictive is that restriction leads to preoccupation. When a person cuts out sugar entirely or severely limits their intake, the psychological effect is that they experience increased sugar cravings and eventually run out of willpower and binge on sugary stuff. When that happens, the person usually panics and goes back to restricting, causing the cycle to begin again. People who don't restrict sugar, on the other hand, usually find that it's just one part of their varied diet and don't obsess over it. Only you can determine how much sugar feels right for your body, and each person's response to sugar will look a little bit different. But cutting out sugar completely? That almost always does more harm than good. 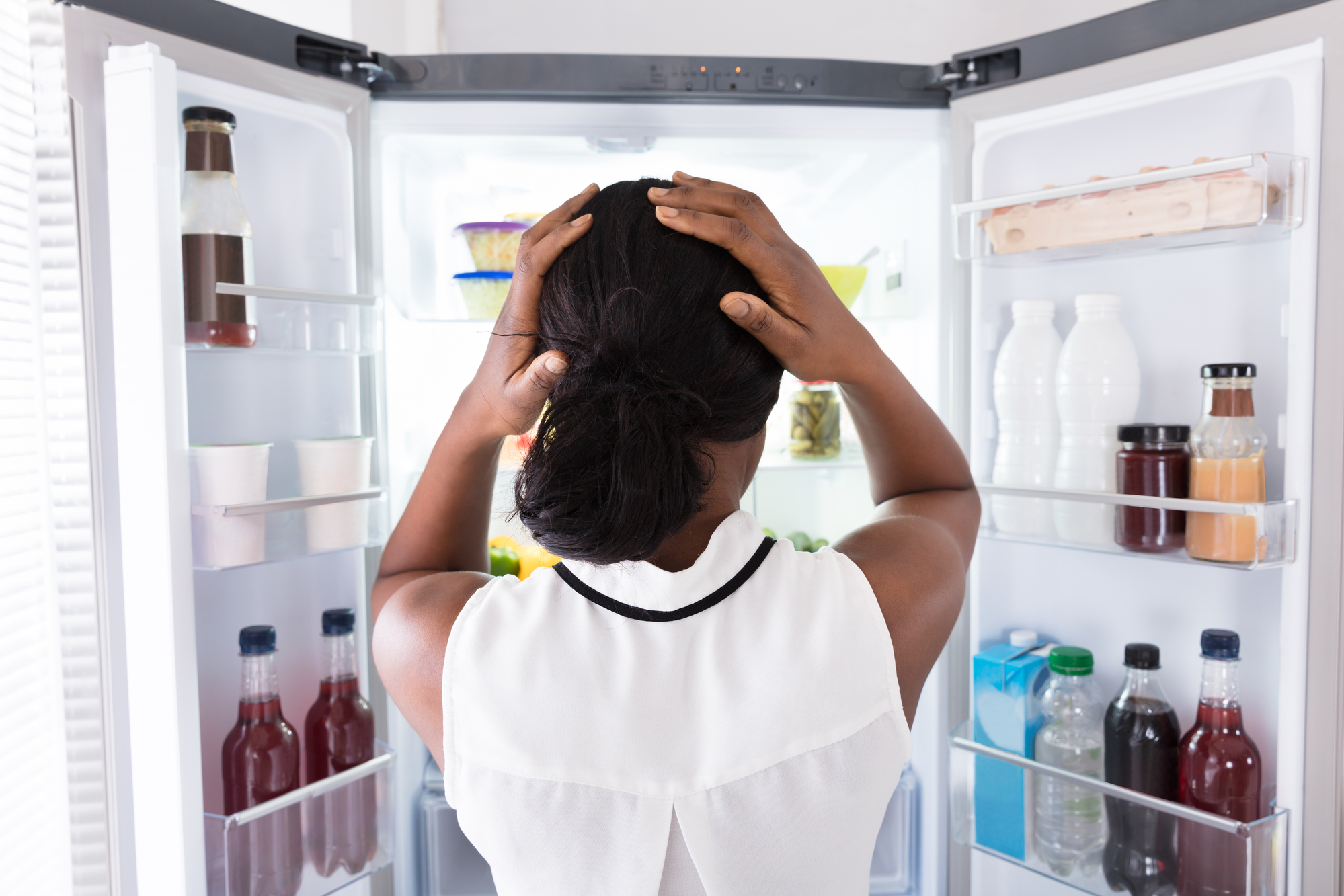 6. Don't Eat Anything With Ingredients You Can't Pronounce

This food rule has turned ingredient labels into a place of fear and mistrust. There are valid reasons why there are chemicals and additives in our food (for freshness, for example), and eating food free of chemicals isn't actually possible. Many ingredients with difficult-to-pronounce names (for example, the chemical names of vitamins) actually have positive benefits. If you're concerned about a word you can't pronounce or don't understand on an ingredient label, simply do some research before writing that food off altogether.

7. Use a Smaller Plate

For a long time it was thought that if you ate your meals off of a smaller plate, you would trick your brain into thinking you'd eaten more than you actually did. Recent studies have debunked this theory, though. The size of the plate or bowl we use won't change our body's ability to sense that we're still hungry, and we wouldn't want it to! That's because when we tune into our hunger and fullness signals (one of the key components of intuitive eating), it helps us eat the right amount of food for our bodies.* That should be our focus, not fancy, and ultimately ineffective, plating tricks.

*Note that people with eating disorders or disordered eating and folks who have experienced food scarcity often have hunger and fullness signals that are not working as they should. They will need a different approach before being able to accurately recognize and act on their body's signals.

If you enjoy dark chocolate, by all means, keep eating it (and you might even gain some health benefits). But if you don't like the bitter stuff, please don't force yourself to eat it just because of all the dark chocolate “superfood” hype. No single food is going to make or break your health and wellness, and you don't have to eat foods you don't like. You can have other desserts besides dark chocolate without needing to go down a shame spiral.

Eating should be a flexible, satisfying experience most of the time, not an ordeal bound by rigid rules that we haven't put any serious thought into. If you've been adhering to any of the above food rules (or other ones I haven't mentioned here), I'd like to offer you encouragement to rebel against them.

You can start by choosing a single rule you've been following and test out what it feels like to let go of it. What's the first small step you can take to stop living by that rule? Maybe it's working on your inner response to that rule when it pops up in your head, or maybe it's choosing one meal a week not to follow the rule and keeping track of how you feel. Over time, as you release the rules that have been dictating your relationship with food, you'll be able to reconnect with yourself to figure out which foods nourish you and in what quantities.

You are perfectly capable of self-regulating your own eating without external food rules. However, this process can be more challenging if you've been on and off diets or following rules for a long time, so you might need some outside help with the process.

Real food freedom comes from not having to obsess over, count, analyze, or nitpick everything you eat. Ditch the food rules and you'll be on your way there. 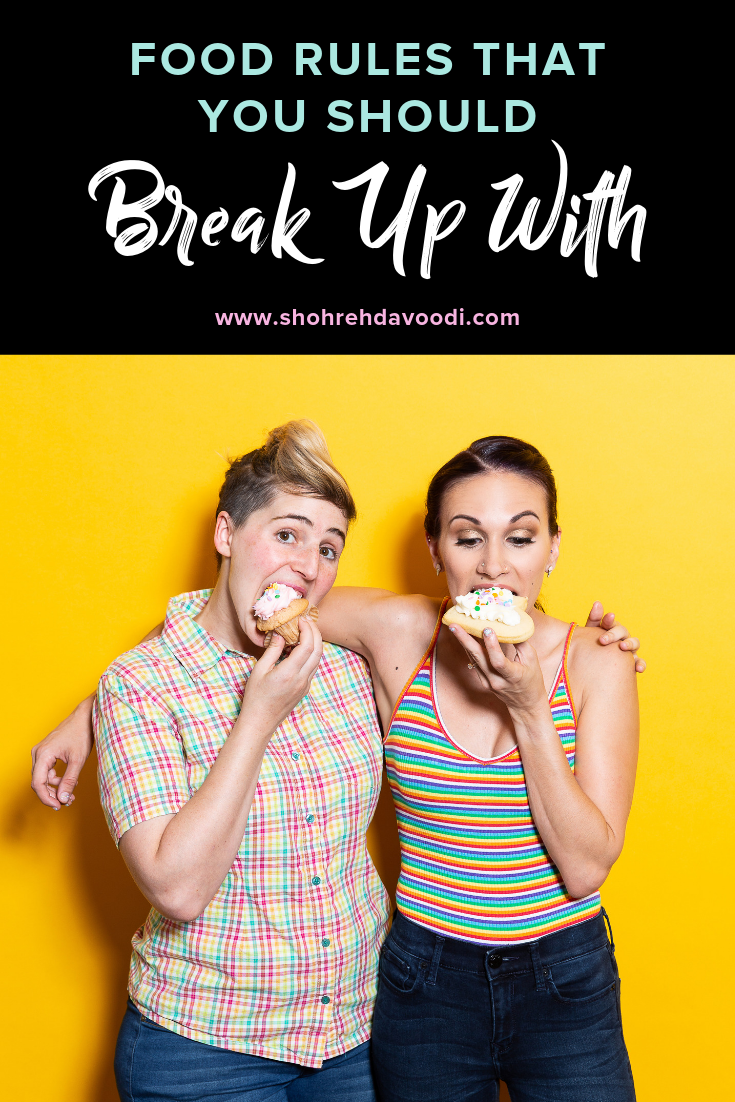 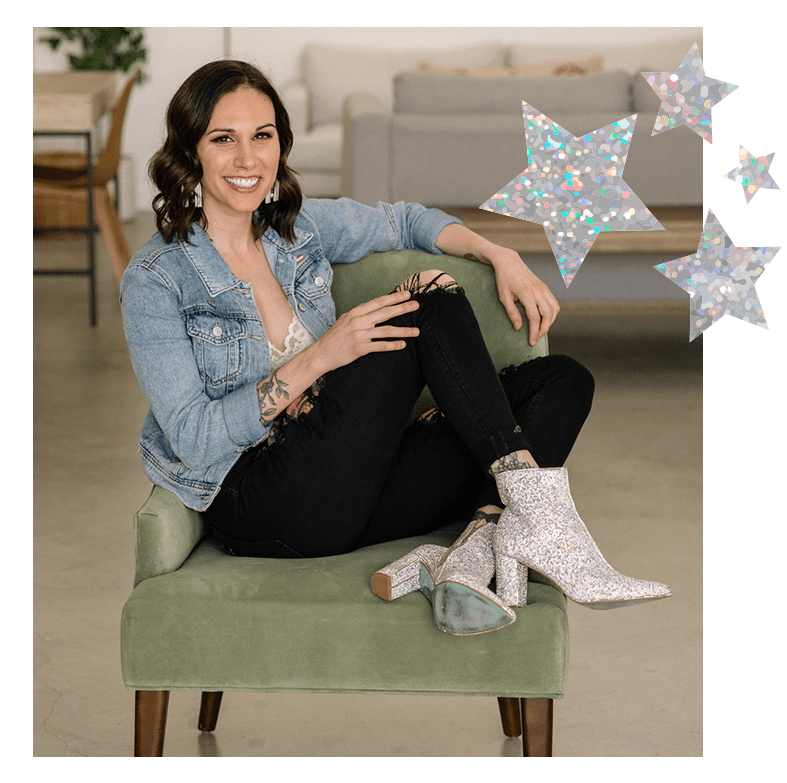